Presented with fond memories, and in celebration of the life of BOB CULBRETH, who has been a longtime member of the orchestra family. (Read more here.)

Beginning with 80 degree weather, the warm evening got even hotter inside Callaway Auditorium November 1st, 2016 for the LSO FIRE concert. This was the second performance in the 2016/17 series ELEMENTAL FORCES.

Greeted by none other than Shakespeare himself, many enjoyed the photo opportunity with the famous playwright who was the inspiration for works in this concert. Actually, the noted challenge for this Shakespearean-inspired program was limiting the choices to a single concert.

Noticing the full stage of musicians, especially the broad range of percussion instruments, the anticipation was already building before the first note was played. First on the program was Elgar’s Pomp and Circumstance March, No. 4. This was not the “graduation theme”, but was composed in the same family of marches published together as opus 39 who’s title is from a line in Shakespeare’s play, Othello.  This No. 4 march is not militaristic, but very grand and stately.  Commanding this piece and performing with “largeness”, the LSO did a wonderful job of giving this piece the royal pageantry it deserved. 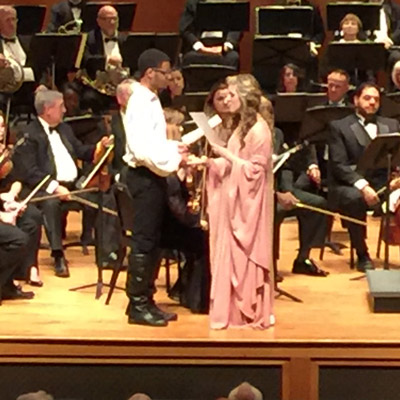 To introduce the next piece, Leigh Anne Hamlin (Juliet) and Caleb Brown (Romeo) with narration by Kim Barber Knoll, performed the famous balcony scene from Romeo and Juliet. Beautifully costumed and eloquently spoken, we saw their young love begin.

Tchaikovsky’s Romeo and Juliet Overture – Fantasy begins solemnly and doesn’t follow the play’s events in the order that they occur. Fantasy portrays the contrasting moods of the characters.  Love and violence were both present and easily recognized.  Recurring danger, an underlying heartbeat and soaring love theme reverberated through the auditorium. It was truly lovely to experience and must be as wonderful to perform as it was to witness because of a noticeable connection between the musicians and the music. 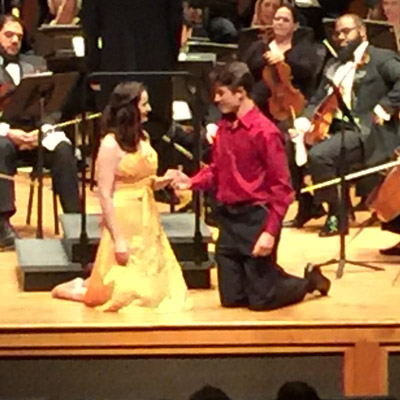 Moving into the 1950s, the FIRE concert next introduced its final piece with a dramatic scene from West Side Story. Narrated by Kim Barber Knoll and played by Mariah Bowen (Maria) and Will Wooten (Tony) the LaGrange Theater Arts department presented Maria and Tony pledging their love. Again, costumed perfectly and with great emotional expression, they set the scene for Bernstein’s Symphonic Dances.

This finale piece takes nine selections from the full stage production. Opening with energy and syncopation, Symphonic Dances was immensely entertaining.  The complexity of the music and rhythms was quickly apparent and was awesome to watch the preciseness and intensity with which the LSO performed its every turn.  The interplay between themes and continually refreshed perspective was appreciable and very appealing.  The audience rewarded Dr. Prior, the musicians, and actors with a warm and long standing ovation.  A stunningly successful performance, the evening was very musically satisfying.

[…] If you would like to reflect on the LSO performances of this music, here are links to those reviews: Bernstein’s Overture to Candide, Sept 25, 2018, Copeland’s Appalachian Spring April 25, 2017, and Bernstein’s Symphonic Dances from West Side Story November 1, 2016 […]