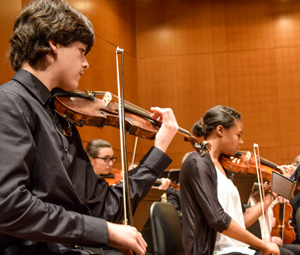 Flowing through Callaway auditorium Tuesday March 21st, 2017 was the fourth concert in the Elemental Forces series entitled WATER.  This concert was filled with fluid imagery and began with a sea of musicians onstage.  This was the annual side-by-side with the LaGrange Symphony Youth Orchestra and the stage was indeed full.  Dr. Prior began by recognizing Celeste Myall, director of the LSYO.  He commended her efforts and also the efforts of all of the wonderful teachers who have invested in these students.

The side-by-side piece was Hoddinott’s Investiture Dances, Op. 66 Allegro and Presto.  This piece is scored for a large orchestra along with some extra instruments, which allows students of several musical areas to participate.  The music was very grand and was actually commissioned for the announcement of England’s Prince Charles officially becoming the Prince of Wales.  Hoddinott was a prominent Welsh composer at that time.  The side-by-side with students and professionals was performed with care and precision and the audience was very appreciative.  Great job.

Next was Mendelssohn’s Die Hebriden.  This piece sounded like an epic voyage, quite different from the first piece.  Beginning with soft misty tones the sound built into a full adventure.  It was lovely, dynamic and successfully depicted Mendelssohn’s memorable trip to Scotland. 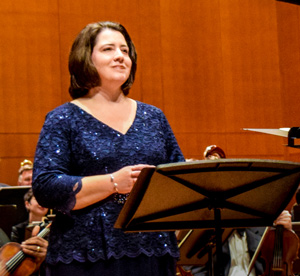 Dr. Beth Everett was the guest artist for the next piece singing Elgar’s Sea Pictures.  Poetic and romantic, the LSO and Dr. Everett’s performance washed gently over the audience.

With five separate songs within this song cycle, the contralto part required a great deal of stamina.  Dr. Everett has a very controlled and powerful voice.  She was brilliant throughout the wide range of poetic moods.

(After a brief intermission, the LSO performed Mendelssohn’s Calm Sea and Prosperous Voyage Overture.  This is a beautiful piece drawing from two related poems depicting seafaring stillness and motion.  Clear and warm, this piece had two distinct feelings and the LSO sailed through it all with skill.

Capping off the evening was Britten’s Four Sea Interludes.  These were compiled from the Opera Peter Grimes, though the order is rearranged for orchestra performance. To say they were very emotional doesn’t do it justice.  The music, rather than being descriptive of the emotions, transferred different emotions to the listeners.  I was surprised and impressed at this.  Coming from an opera you would think a large dependence would be on the vocals.  The LSO had extreme attention to detail here with instruments responding to each other with both contrast and similarity. To me, this performance stands out.

If you enjoyed the concert, you can easily let the world know by visiting us on facebook and giving a quick review. You can also post your photos from the concert there.

On behalf of everyone at the LaGrange Symphony Orchestra, we extend our sincere gratitude to Higgins Funeral Homes for sponsoring this March “WATER” concert.  Their enthusiasm and continued financial support has made this event possible.

Thanks are also extended to our wonderful Patrons for supporting the arts, especially the LaGrange Symphony Orchestra.